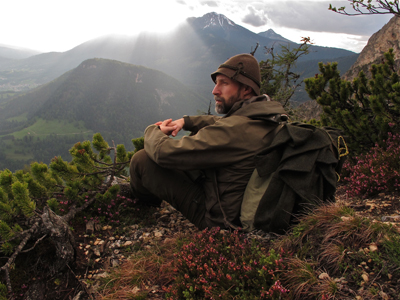 Giulio Tasca is born on 25 February 1973 in Bassano del Grappa in the province of Vicenza. The environment where he is growing up is characterized by a grandfather who is gamekeeper, a father who is hunter and a house that is scene of “Filò”, where there are gatherings of his father´s friends and talks, hours and hours, about hunting, about that deer with impressing antlers, that, like a ghost, disappears at the beginning of the hunting season, just to appear again the year after... These and other stories which Giulio internalizes and that are subject of his dreams, are part of his wishes he will form and bring into form later on. From the cradle gifted by an exceptional artistic talent, he is working up all his dreams by connecting them with concrete observations. Almost obsessively he is pushing his father to go on observation tours with him, to be able to watch the animals in their natural setting. Already at the age of ten he does his first sketches and soon paintings on canvas follow. From then on it is like an addiction, every time a pencil or a brush is at hand, he starts drawing. As soon as he is old enough he acquires his first hunting license and further attends courses that enable him to attend the selection of ungulates. Always fascinated by these breath-taking animals, he studies their behaviour, their morphology by tackling scientific texts and checking those theories with binoculars in the field. He is interested in all that nature provides which leads to a steady connection with it and he neglects other “rules” which his peers follow. He is lucky. The fact that his father is visiting hunting districts in South Tyrol and Slovenia, that was then part of Yugoslavia, enables him to get to know different hunting incidents that captivate him in a way that his desire is awakened to eternalise this diversity of climates and surroundings which are part of his dreams in his painting. Especially in the 90s on, he pursues this way in a very conscious manner when he lives, because of an important decision he had to take, in an enchanting valley in Alto Trentino which is embedded in the National Park Parco Nazionale dello Stelvio. There, all the mountain dwellers like deer, chamois, roes and capercaillies form part of his daily life and become intimate although dumb dialogue partners.

The presentation of these scenes are never restricted and never resemble a “postcard”, but again he is looking for a special environment, where he enfolds the portrait of the animal with a magic atmosphere enriching it with the emotions of a hunter.

Self-taught, he starts extensive studies of techniques and solutions, which he uses in his meticulous search of the special.

Thus, he begins exhibiting his works in several trophy exhibitions in Trentino and in his home province very successfully but too soon his artistic work is interrupted by personal family problems that block his inspiration and conversations with “his” animals.

This artistic absence causes inner deterioration that leads to inner pain. After all this time he draws back from his environment to find peace and balance which he turns into art by revitalising the past and letting his passion become his occupation.

After many years of research and trial he refines techniques and materials which in his painting express hyperrealism that is always closely connected to the mystical of the particular scene. Actually, he makes himself conspicuous by his unique painting style prefering modest colours, natural shades and merging light.

He dedicates his diligence and his studies to watered acrylic paint and other blends of colour he experimented and carries over to treated and honed wood board. For him, the result is the success he always pursued that now is his flagship.

Through the compilation and the blending of the colours, but also by treating the wood boards he manages with exactness and the patience of a Saint to illustrate the characteristics of the animal; may it be the fur or the plumage, the expression of the body in a specific movement, or the penetrating expression of the eyes of a stag that has been discovered.

The paintings arise through a connection of techniques and spontaneity, to express a context that is based on the experiences of a hunter. To Giulios satisfaction, his paintings at the most famous international and national exhibitions are appreciated by the critics as well as the audience.

Beside ungulates and other typically Alpine species, he loves to portray hunting scenes with the “Queen”: concerning these paintings, where he also accepts dog photos if desired, he succeeds in capturing the fantastic stroke of wing of the magician of the forests.

Incessantly Giulio is devoted to painting while he also spends time on observations out in the woods and hunting. Constantly, everything is influenced by his dreams, which become reality through his paintings. Another characteristic of his technique is the lifelong preservability of the colours that is made possible through treatment with varnish. The colours are not just visible on the surface but thanks to this technique are treated to the bottom. The singularity of the expression of the painting causes a threedimensional personality not caused by different layers of paint but the interplay of light and shadow.

Everybody is welcome to visit his works at his homepage www.giuliotasca.it or admire them at one of the exhibitions at the most important fairs of the country or at his studio in his house in Stava (TN).

Page dedicated to on order hunting potraits from the hunter's picture

Page dedicated to bird of preys

My passion and my time

Color tubes and brushes per year

The best of my career